Fort Worth— after twenty-five years as Head Football Coach and Athletic Director, Tim Buchanan has announced his retirement from Aledo ISD and will begin a new role with Texas sports contractor, Paragon Sports Constructors.

“Aledo ISD and the community have been great to my family and me.  After nearly three decades in the coaching world it is time for me to move on and take on new challenges professionally,” said Tim Buchanan regarding his 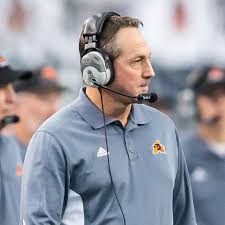 Tim Buchanan led the Aledo Bearcats to five state championships as head football coach before stepping into the Athletic Director position full-time in 2014.

decision to retire.  “I will miss the kids but plan to remain a part of the Aledo community.”

Buchanan arrived in Aledo in 1993 and served dual roles as head football coach and athletic director from day one.  He racked up a record of 227-53-3 with five state championships before stepping out of the head coaching roll in 2014.  MaxPreps calls him “one of the Lone Star State’s most successful and respected coaches.”

Under his tenure as Athletic Director, Aledo ISD became one of the most recognized athletic programs in the state of Texas; winning two more football championship in 2014 and 2016 along with state titles in baseball, men’s golf, and three championships in softball.

“Coach Buchanan has an excellent reputation and brings a fresh, unique perspective to our sales team having purchased numerous athletic construction projects at Aledo,” said Paragon Sports Constructors president, William Chaffe. “Tim is a proven winner and fits our culture well.  We are looking forward to learning from his leadership and experience as an athletic director to continue growing and strengthening our services for Texas schools.”

“When I started looking for a career after education I wanted to find something that would keep me tied to athletics and working for Paragon does just that,” commented Tim Buchanan.  “I will still be able to interact with coaches, share what I’ve learned as a coach and administrator, and help provide great surfaces for athletes to train and compete on.”

Buchanan will start working into his role at Paragon Sports Constructors immediately while remaining an advisory point of contact for Aledo ISD as they transition to a new athletic administration.

Paragon Sports Constructors is a turn-key contractor of natural and synthetic turf athletic fields and running tracks based in Fort Worth, Texas.  With over 30 years of sports construction experience they are one of the premier athletic field and running track contractors in the South Central United States.  Paragon Sports Constructors is a member of the American Sports Builders Association who remains focused on quality construction practices, choosing to partner with top brand name manufacturers of synthetic turf and track surfacing to provide clients a consistently high-quality project from planning to first use.  For more information on Paragon Sports Constructors please visit www.paragon-sports.com or follow them on Twitter @ParagonSportsCo.

Go Back
Read The Next Article